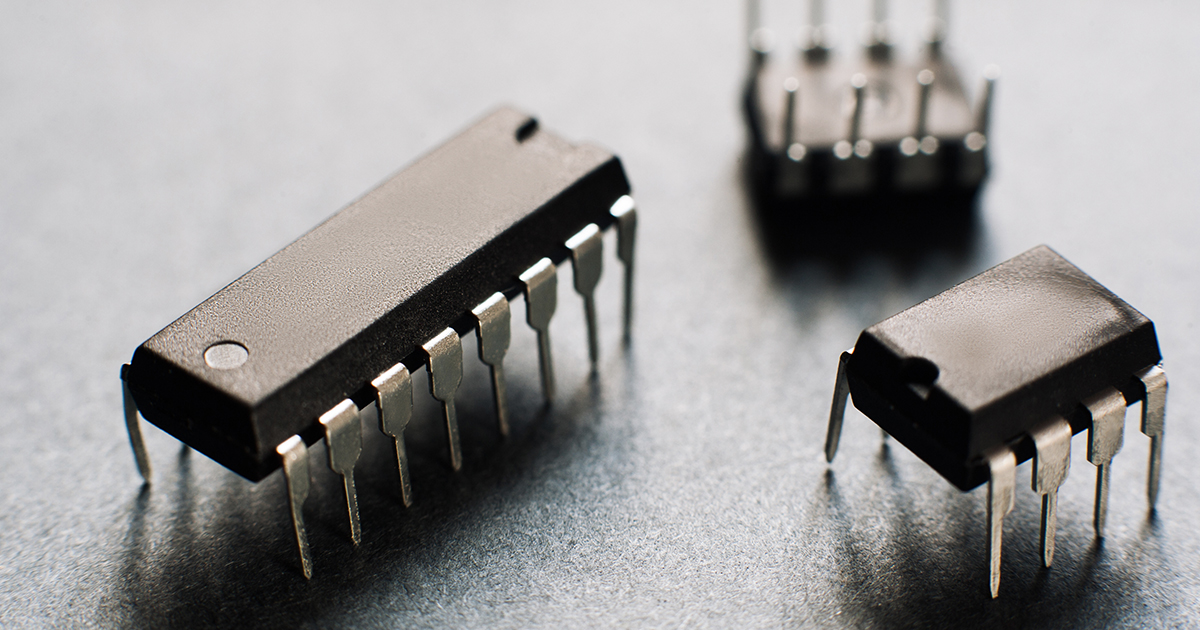 Editor's Note: This blog was originally published in December of 2019 but has been updated for accuracy. .

Karl D. Swartzel Jr. of Bell Labs filed a patent for the “summing amplifier” in 1941. Originally, the device was used to perform mathematical operations on analog computers. Thus, the component earned the “operational” part of its name.

Today, op amps are the building blocks of many modern analog electronic circuits. The devices still perform complex mathematical operations like integration and differentiation. However, thanks to their low cost, optimal performance, and widespread availability, these versatile components are used in myriad consumer, industrial, and scientific applications.

Technically, an op amp is a high-gain voltage amplifier with differential inputs. Commonly found in integrated circuits (ICs), their input and output terminals produce voltage signals larger than what is passed through them. The op amp essentially helps boost signals that typically decrease as they pass through discrete elements in an analog circuit. Ultimately, the devices produce a useful output signal.

An op amp’s extremely high gain can’t be changed, but applying feedback loops to one can control it. Ultimately, adding resistors, capacitors, and inductors creates different configurations on an op amp circuit that will produce widely different results.

Overall, the adaptability and versatility of this three-terminal device make it a popular component in many designs.

An ideal op amp would have infinite open-loop gain, infinite input impedance, zero output impedance, and infinite frequency response with zero noise and no distortion. Realistically, no op amp can satisfy all these requirements.
‍
General-purpose op amps will work well in many circuits. However, some applications may require higher performance from a specialty device.

To meet the varying design requirements of different applications, engineers should consider several factors to make sure they are selecting the proper op amp. These key attributes are detailed below.

One of the most distinctive characteristics of an op amp is its high gain.

Gain measures an op amp’s amplification factor —or how much larger the magnitude of its output is compared to its input. It’s typically called an “open-loop gain” or a “large signal voltage gain.”

An open-loop gain measures the device’s gain without positive or negative feedback. When open-loop gain is listed, it represents the maximum AC gain at very low frequencies. Ideally, op amp gain should be infinite, but real values usually range from 20,000 to 200,000 ohms.

By comparison, a large signal voltage gain (aka AVD) depicts the ratio of the output change to the input’s differential voltage shift. It is measured at low-frequency DC, and the amplifier produces a large voltage output. It is typically preferential to an open-loop gain, usually as V/mV. Notably, this gain is measured without an output load, which accounts for loading effects.

The most common number of channels for an op amp is 1, 2, or 4. However, they can have as many as 8 channels.

In general, an op amp's input and output impedance show the relationship between voltage and current.

Input impedance shows how much more current will flow as the voltage increases or how much less current flows when voltage is decreased.

Output impedance, on the other hand, is ideally zero. However, most actual IC-based op amps have output impedance values of less than a hundredth of an ohm.

An optimal op amp would have infinite bandwidth and be able to amplify any frequency signal from DC to the highest AC frequencies. However, bandwidth for actual op amps can only amplify sound through a specific range of frequencies. Once it exceeds its frequency limit, the device can’t produce sound.

The Gain-Bandwidth Product (GBP) describes the frequency at which the op amps’ amplifier becomes unity-gain. The factor allows designers to achieve the maximum gain an op amp can produce for a given frequency.

The slew rate of an op amp is the rate of change in the output voltage caused by a step change on the input. It is measured as the ability of a device to change its output voltage by a certain amount in a given amount of time.

An op amp should have an infinite slew rate in a perfect world, meaning the output from the amplifier would be a distortion-free amplified copy of the input.

In actual designs, the higher the slew rate is, the faster the output can change. Engineers should also be aware that slew rate change values vary according to the type of op amp used. So, low-power op amps might yield a slew rate value of one volt per microsecond, while faster op amps can provide rates of 1,000v/microsecond.

The perfect operational amplifier would have zero noise. Unfortunately, all op amps contain several internal noise sources such as current, resistor, and more. They are measured at the output and refer back to the inputs. The Equivalent Input Noise Voltage is the most significant noise type, and its also bandwidth dependent. Overall, designers should aim for this noise value to be as small as possible.

Overall, engineers should consider these factors and how they impact each application’s specific design requirements when deciding which op amp to use for a project.

Sourcengine provides a massive global database of over 1 billion unique parts that are accessible anytime and anywhere to meet project needs. Technical specifications s are also available for each item.

Below is a brief description of this year’s ten most popular op amps.

This part features two high gain, independent, internally frequency compensated op amps. The dual operational amplifier functions across a wide range of voltages from a single power supply. The device is available in a SOIC-8 package with a 1.1 MHz wide bandwidth (unity-gain). The part features a typical input offset voltage of 1mV, a maximum input offset current of 10nA, and a temperature compensated maximum input bias current of 50nA.

This dual low voltage rail-to-rail output op amp is well-suited for low-cost, space-saving, and low-voltage applications. The part comes in a VSSOP-8 package and operates between 2.7V to 5V with a low supply current of 210μA. These devices are used in various applications, including pro audio mixers, HVAC systems, desktop computers, and more.

The LM358N/NOPB is internally frequency compensated and has a DIP-8 package. It is a dual input op amp with a typical input offset voltage of 2.9mV and a standard input offset current of 5nA. The input bias current of the device is 45nA and maximum amperage of 250nA

The UA741CP is a single, general-purpose op amp with a7500uV offset max. Its packaged in a PDIP8 tube and offers short-circuit protection and offset-voltage null capability. The device features internal frequency compensation, which helps ensure stability without external components. Its supply voltage range is ±15V with a large signal differential voltage gain of 200V/mV. The amplifier’s high common-mode input voltage range and absence of latch-up make it well-suited for voltage follower applications.

Like the LM358ADT, the LM358DT is a dual-function device designed to function over a wide range of voltages from a single power supply. The two independent, high gain, internally frequency compensated op amps come in a SOIC8 package. The device features a typical input offset voltage of 2mV and an input offset current of 2nA. The part’s wide gain bandwidth is 1.1MHz, and it can support dual power supplies with a range of ±16 V. Plus, it has a significant signal voltage gain of 100v/mV.

This low-power quad op amp has a wide gain bandwidth of 1.3MHz, a maximum input offset voltage of 5mV, and a low input bias current of 20nA. It comes in a PDIP14 package type with a 9000uV offset max.

The MCP6001T-I/OT is made for low-power, low-cost, general-purpose applications. The single op amp operates in an industrial temperature range of -40°C to 85°C. The amplifier's typical gain-bandwidth product is 1 MHz and has a SOT-23 package. This component family can operate from a single supply with voltage as low as 1.8V while drawing 100µA quiescent current. It can be used in analog filters, notebooks, motor vehicles, and more.

The LM324AMX/NOPB four internally compensated op amps in a single SOIC14 package. It operates from a single power supply across a wide voltage range for 3V to 32V. The low-power, general-purpose op amp carries a large signal voltage gain of about 100V/mV. The component also features a  1MHz wide gain bandwidth with a low input bias current of 45nA, a low input offset voltage of 2V, and a 5nA offset current.

The LM741H is a single-function operational amplifier with input and output overload protection. Notably, it has no latch-up when the common-mode range is exceeded. The general-purpose amplifier operates with a ±15V supply voltage range and a ±22V maximum supply voltage range. Its bandwidth tops out at 1.5MHz and has a large signal voltage gain of 200V/mV. The device comes in a TO-99-8 package and is a direct plug-in replacement for op amps such as 709C, MC1439, LM201, and more.

Engineers and professional buyers can find pricing and lead times for these ten popular op amps by searching Sourcengine’s global e-commerce database. By logging into the marketplace, customers will see preferred pricing and have full access to parametric data for over 1 billion components on our marketplace.