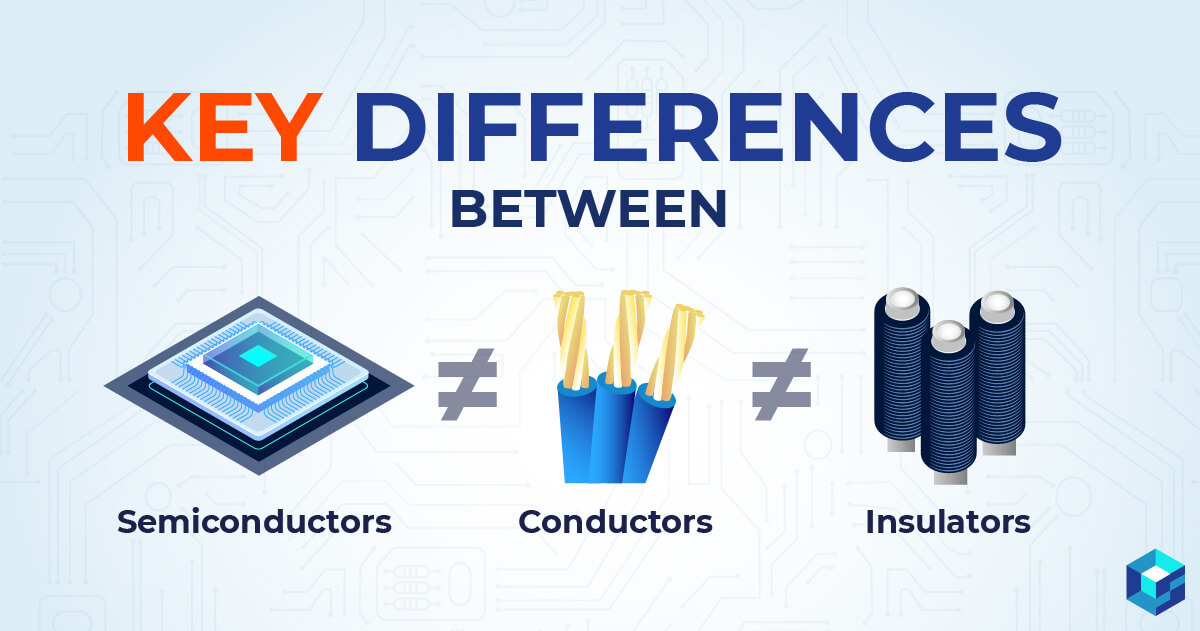 Your manufacturing or distribution enterprise uses semiconductors, conductors, and insulators daily. You probably ordered dozens, if not hundreds, of these electronic components in the past.

But what exactly are they, and what are the main differences between the three accessories?

Depending on your supply chain management (SCM) role, your familiarity with these complex electronic parts might be a bit vague – then again, you could know them like the back of your hand. Engineers and designers, for example, are usually more knowledgeable about semiconductors, conductors, and insulators than sourcing professionals.

Regardless of how you contribute to your company’s SCM process, it helps to know the differences between each part.

Before discussing what distinguishes semiconductors, conductors, and insulators from each other, let’s discuss the concept of conductivity. Simply put, conductivity is the degree to which electronic parts, materials, and other substances promote the free flow of electricity. The more a material allows electric current to flow through it, the more “conductive” it is. Conversely, the more restrictive a material is to electric current, the more“resistive” it is.

In the world of conductivity and resistivity, think of two common materials: metal and rubber. While metal is one of the most (if not the most) conductive elements in the world, rubber is known as a primary example of a resistive material.

To understand conductivity better, the type of metal used for conductivity (silver, mercury, steel, iron, etc.) helps refine and customize the electronic components that comprise any conductor – but more on metals in a moment.

Let’s apply these principles to semiconductors, conductors, and insulators:

Keep conductivity in mind with these three electronic parts, and your understanding of each will click. To further familiarize yourself with these components, let’s look at some common examples.

You already know metals are a conductive material. The best conductors are common metals like copper, aluminum, steel, iron, alloys, silver, and other varieties. Other prime conductors include graphite, mercury, and even so-called “dirty water,” as opposed to pure water. That’s why you should never have an electrical appliance plugged in next to your bathtub – if the device comes in contact with the water, that tub would be more like a skillet or microwave!

Early scientists identified conductors and insulators with relative ease. It was only in the mid-20th century, when the integrated circuit was invented by William Shockley, Robert Noyce, and others, that the term “semiconductor” came into existence. Semiconductor materials include elemental substances like carbon, germanium, boron, and the most famous material of all, silicon. That’s how the world’s leading tech center, Silicon Valley, got its name. That computer you used at work or the smartphone you can’t do without? They’re both powered by semiconductors with millions of circuits and transistors, all comprised of silicon.

While conductors and semiconductors are made of harder to find materials and substances, insulators include everyday household items like glass, rubber, lumber, fiberglass, plastic, ceramic, and even air. Insulators are used to minimize electrical current distortion, protect against electrocution, and plenty of other common applications.

And there you have it: With a thorough overview of conductivity and common materials, it’s easier than you think to discern and distinguish what makes semiconductors, conductors, and insulators different – and also more interesting.

Streamline and Simplify Your E-Procurement for Semiconductors, Conductors, and Insulators: Sign up with Sourcengine™ Today

Now you know the differences between semiconductors, conductors, and insulators. And here’s another quick contrast and comparison to know about: when it comes to e-procurement, supply chain management, and ultra-easy electronic parts ordering, there is Sourcengine’s e-commerce marketplace and everything else.

Our intuitive, elegant interface leverages the global marketplace in your company’s favor with instant offers, powerful BOM integration tools, and much more. Simply put, Sourcengine is the ultimate “conductor” of your entire SCM protocol.

Set up a demo to see how our supply chain resources and tools can benefit your organization. You can also contact us to learn more about our advanced e-procurement platform.