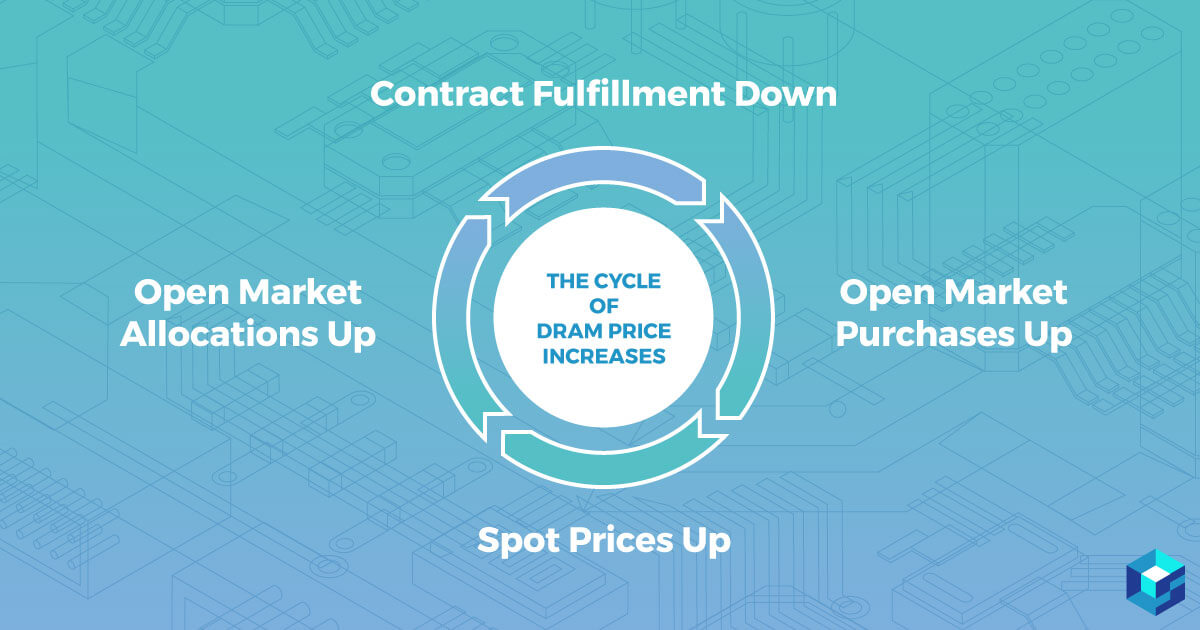 DRAM Supercycle Over Thanks To External Forces

DRAM prices continue to be sky-high, but supply and demand are evening out and external pressures are being mounted on manufacturers’ prices. What does this mean? The shortage and price escalations are (finally) at an end.

Increased fulfillment isn’t the only thing narrowing the gap between supply and demand, though. Companies burned by low fulfillment over the last two years, over forecast and ordered more components than they needed, hoping to get about the right amount fulfilled. Now they’re getting all of those orders in and their problem has turned from a shortage to excess. What to do with excess parts? Put them on the open market (pushing spot prices down) or store them for the next production run. Either way, OEMs/EMSs are ordering less from the component manufacturers on their next order. Demand is lowered, supply is increased, and the shortage goes away.

Component manufacturers are currently enjoying historically high profit margins on DRAM. Manufacturers are always advancing technology, both in terms of production and product. The more advanced the tech, the higher the yield (in this case, more gigs of memory produced at a lower cost). With a healthy amount of competition, these savings would be passed along to customers. DRAM, however, is produced by just three main companies: Samsung, Micron, and SK Hynix, who combined control about 97% of the market. They’ve kept prices as high as the market will bear. There’s a word for that: price fixing.

A class action lawsuit has been launched against the three companies by Hagens Berman. Those who have been in the industry long enough may recognize that firm as the same that successfully won a similar case against DRAM manufacturers in 2006. There’s no reason to suspect they won’t be successfully again. At the same time, China’s Anti-Monopoly Bureau has been doing its own investigation and has directly “asked” the manufacturers to lower their prices. Manufacturers don’t want to lose the large Chinese market, so at least some form of compliance is extremely likely.

The smart, easy play for Samsung, Micron, and SK Hynix is to stop pushing prices higher. This will quiet much of the noise about price fixing while they continue to enjoy high profit margins. Plus, as described above, the shortage is effectively over and wouldn’t have supported many more price increases anyway.

DRAM is still controlled by an oligopoly and will be for at least a couple more years (the earliest estimates for when Chinese DRAM production will begin are for 2020). Manufacturers will do their best to keep from flooding the market and pushing prices down beyond what’s already happened with OEMs/EMSs who over forecast.

So there you have it. The shortage is over! Prices will stop climbing! Costs are… still up there! Hey, two out of three ain’t bad.